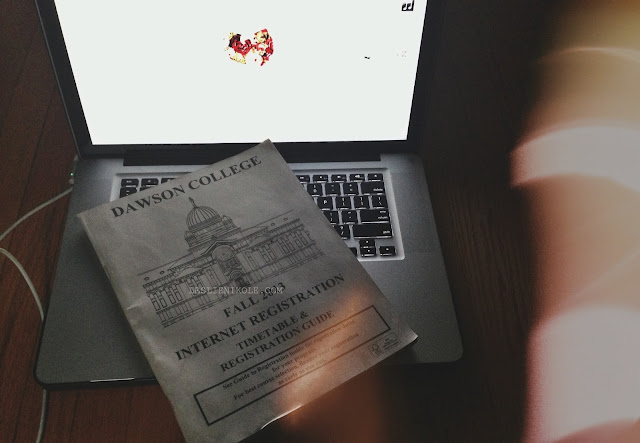 So…I made it through my second first day of college.

Going back to school after being out for almost ten and a half months is weird. Waking up (and not going back to bed) at six is weird. Putting books and their corresponding notebooks in my bag is weird. Starting over makes me feel old and out of place, I'm the only one in most of my classes who's done the college thing before. I've changed not only programs, but schools as well. This one is much, much bigger and with many more wings and floors to inevitably get lost in. My feet are a little sore from walking, but that serves me right for wearing Sky Hi Dunks on my first day.

In 2011, fresh from my London-Paris-New York City summer, I started Nursing School at Vanier. In my sophomore year of high school (or grade nine for people who know how the Quebec secondary level education system works), you basically had to choose if you were going to continue into sciences or the arts. As strong of a footing I had in both, I realized quite early that the arts was nice, but wasn't particularly going to feed me all the nice cheeses I like. I opted for sciences, went through environmental science, chemistry, and physics. I did pretty well overall, and with my grades and ability to care for people easily, Nursing was an intelligent choice. I loved Nursing School. It was a lot of hard work, sometimes I didn't understand all of it, and I often had to hold back emotionally for the sake of the patient. If anything, that was one of the most difficult things to do. Despite the awkward feeling I have now at my new school, I wouldn't give back the people or the experiences I had at Vanier. I like to think Nursing School made me a better person. If anyone stumbles upon this and is considering Vanier or knows someone who is for Nursing School, definitely push them to choose Vanier.

However, things went south last year. At the end of my first year in Nursing School, things started taking a turn for the worst in my life. People who I relied on turned into different people overnight and many secrets were spilled. It's probably my bad for putting so much trust in people and letting them have that effect on me, but what happened, happened. I returned to school in a funk. A few people died, I essentially lost a few members of my family due to foolishness, and then my grandmother got sick. I'm not gonna sit here and act like my grandmother and I are out here keekeeing it up every two seconds, but to not have her around is always a huge fear for me. If it wasn't for me, my grandmother would have never came to visit (and then forget to leave) from Barbados. My father's mother, currently 101 years old, is a gem I'm much too afraid to polish. It was starting to get a little colder, and she swung into her normal flu-like state. Then she didn't come out of it for about a week. For a week she barely ate and thinned before me. I really thought I was going to lose her. Then I got sick as she started to get a little better. Then there was tests and papers and everything. I didn't ask for help (my bad) and I didn't talk to anyone about my problems (again, my bad) until I'd already left the school. Probably if I did, I might not be writing this. Nursing School teaches you teamwork and the consistent need for communication, but I didn't apply that to my own life. I took a lot of burdens on myself and harboured a lot of anger, which I'm still dealing with. I only made it half way through my third (out of six) semesters before I had a breakdown. My nursing instructor (well, the instructor who was leading our group) was a huge support for me when I spilled. She noticed that a lot had changed and made it really easy for me to quietly bow out, which is exactly what I wanted.

When the papers were finalized, she told me to take a little vacation and maybe come back to do something else I love, something a little more consistently creative. With all the stress from school, I wasn't really looking forward to going back, and was pretty much dead set against it. The only programs that interested me (aside from science ones, which would have stressed me all over again) were Literature and Languages at Dawson. I didn't really want to go to school for literature studies; I really hated reading revered classics thanks to three years of advanced English classes. Languages was my last option, and even that I wasn't really feeling. A few friends really stuck by me and encouraged me to apply, insisting that two years was nothing compared to the two languages I'd know once I was done. Over time I grew into the idea of being a Languages major, made my withdrawal from Vanier final, and then was accepted to the Languages program to study Spanish and German.

Like I said before, I've always had to choose between the arts and the sciences, leading up to me now having the chance to try both. Of course, there are somethings I will have to get used to. For example, currently I'm taking five classes within three days. My first semester of Nursing School however, I had five classes and was at school all week long. Trying to get my brain from "difficult program that I have to put a lot of effort into" to an "easier program that I have to put only a good bit of effort into" will not be easy. I have a bad feeling that with all of this extra time my time management skills will be horrendous, compared to when I was at Vanier and had no choice to be organized.

Overall, I'm really content. The few classes I've had so far seem pretty interesting, and I'm really ready to dive into the material.


To all my fellow students, have a great semester!