#SOLIDARITYISFORWOMEN, AND OTHER GREAT THINGS THAT HAPPENED TODAY.
leave a comment (0)
Feminism is such a touchy subject only because the label gets thrown onto so many things that don't often even match up with the movement's actual definition and/or purpose. Feminism has become this bad word, one that indicates you've been muddling around the various gender tags on Tumblr with an attitude and now have developed this hatred for men, or that you believe that women should run the world and men should only be kept for reproductive purposes, or other crazy things like that. Quoting back to bell hook's working definition of feminism as "a movement to end sexism, sexist exploitation, and oppression", noting for once and for all that this "does not imply that men [are] the enemy" but "that all sexist thinking and action is the problem", this is really what feminism is, and should remain, no matter how much it branches out.

The only reason why I bring this up is because I met a woman (who sees herself as a product of the second wave, a roughly twenty-year period starting in the early 1960's) today, who I rang up at the bookstore for a few feminist anthologies and theoretical works. I think I started off the conversation by asking her if she heard of bell hooks, and some how we got rolling from there. One of the biggest and longest topics we discussed was the attitudes of some groups within the current third wave of feminism, specifically it's militantness. She told me she agreed with my disdain towards that aspect of some groups that manage to fall under the umbrella of "feminism", and lamented over the strained relations between second-wave and third-wave feminists. That's where things got heavy.

When it comes to strained relations (mostly on the part of third wave feminists) between these essentially two different generations, so much seems to be ignored. The woman noted that she felt as if some literature was conceived in anger on the parts of third-wavers towards second-wavers for not tackling enough issues during their time. All though this rift does present itself, I think many people fail to realize that the fact that second-wave feminism even EXISTED (because as she put it, "we're lucky we have checking accounts now") during this time was a triumph in itself.

Think of the 1960's, a new American life filled with blooming technology and even more so bustling cities, the reconstruction of families, and the movement of women from the home to the workplace. For this and future generations to come of feminism, the slow and steady foundations built by second-wavers should be looked at with admiration instead of disappointment. At that point in time, the social capability to converse and share with those of different economic classes, races, sexual preferences, and religions wasn't exactly easy. Second-wave feminists did not grow up with the hand copied and stapled chapbooks, all girl groups, and definitely not the technology many of you reading this have been assimilated into.

Technology has been able to move us forward. Even if you don't know someone personally of a specific group, somewhere on the internet is a blog, just waiting to be discovered. The Bloggers, LiveJournalers, Wordpressers, and even Tumblrs, around the world have essentially made it possible for anyone willing to listen to the stories of someone with a different experience. While this is common for us late 80's and 90's babies, it definitely is not for the feminists that raised us. 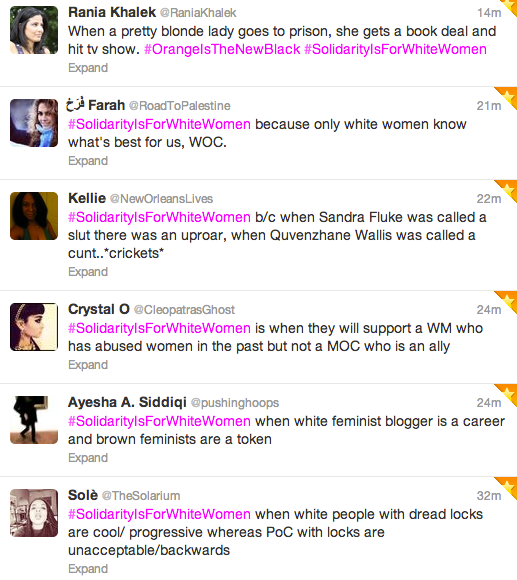 Don't get me wrong, the internet (especially Twitter) is usually a cesspool for debauchery. Today however, someone got it right with the birth of the trending topic "#Solidarity Is For White Women". I don't know who started this, but they really do deserve a medal. Big shoutouts to @Karnythia for these screenshots!


Quickly shooting up the charts, this trending topic was completely taken over by women of color worldwide with many things to say about the third-wave of feminism. Most of these tweets are an accurate representation of the hypocrisy of certain branches who scold second-wavers for not being radical enough, yet marginalize women of colour. Even in this new wave, there is still a sense of other.

The part of this new feminism that is quickly becoming popular is a racist one. Women of Colour worldwide are seen as "defenceless" and needing to be "saved" from their "backwards" cultures and religions. For example, in the case of FEMEN, a Ukrainian "feminist" group against the veiling of Muslim women, their lack of solidarity was a major problem and received much well deserved backlash. In the process of being militant towards Muslim women having the choice to veil or not, FEMEN took a sharp left and dropped into the seedy world of taking that choice away from the group they supposedly are defending and enforcing a rejection of the hijab. Is that not counterproductive, to have one side enforcing the sole option to wear hijab and FEMEN backing their only option of not wearing it, and no one defending the right to choose?

Many feel as if feminism should be a one size fits all group, a detrimental ideology that basically erases the experience of different individuals. Flavia Dzodan said it best in her well circulated post on Tiger Beatdown, "feminism will be intersectional or it will be bullshit!" The current state of feminism is obviously the latter. There is no solidarity within feminism when incidents like the "nappy headed ho's" comment sweep quietly by within the feminist realm, or where outrage at the photo of a young white woman holding a sign at SlutWalk NYC saying that "women are the nigger of the world" (thanks a lot John Lennon and Yoko Ono for that blatant foolishness) is met with confusion. Casual racism within the third wave will abort the possibility of progression for a fourth one. At this point in time with the advantages we have, movements that are supposed to be about going forward are stuck in the past and refuse to accept it. Feminism is not only for white women, but for everyone in general. Until women of color have the same standing as their white peers, the movement will be stuck.


Edit Friday, August 23, 2013: I'd like to also note that blogger Mikki Kendall (@Karnythia) is actually the FOUNDER of the hashtag #SOLIDARITYISFORWHITEWOMEN, a fact that many articles about the uprising on Twitter failed to mention.