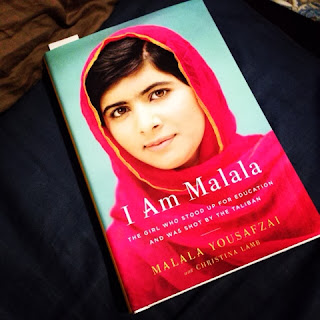 One day I saw my little brother Atal digging furiously in the garden. 'What are you doing?' I asked him. 'Making a grave,' he said.

Sometimes (read: most of the time) I feel like humans need some sort of buffer. On a day to day basis, things would run a lot smoother if we had a little buffer to set us back on the right path if we are about to mess up. In this case, the committee behind the Nobel Peace Prize needed that buffer. They could have hired me, for free, to do this job, but unfortunately I was not contacted. The Norwegian Nobel Committee decided that this year around, the prize should go to OPCW, the Organization for the Prohibition of Chemical Weapons "for its extensive efforts to eliminate chemical weapons". This organization has been around since 1997, but was chosen this year to receive the recognition. Who were they in competition, a word I use with a heavy dollop of sarcasm, with?

Malala Yousafzai, a Swat girl living in Pakistan who for the most part of her life insisted on her right to an education and the education of other girls in her country, then survived being shot in the head by the Taliban during an ambush on her way to school at the age of fifteen. Let that sink in.

There have been comments about Yousafzai having help to write this book, but it's very obvious that is her story to tell. If you've seen the numerous interviews she's done, both personalities match up. I Am Malala is important, not only because of the events that happened in the last two years, but also because of the amount of history packed into this book. All the dates and people Malala references in this book are things I've never heard of. I would have gone through this book a lot sooner if it wasn't for doing minimal research. I know nothing about Pakistan, except for where to put it on a map, so definitely through reading this I learned a lot. I definitely feel that this should be in schools around the world, especially coming from a city that was caught in riots over education fees, currently $2168 per year to attend university (including McGill University, the Ivy League of Canada). Please note the sarcasm there too.