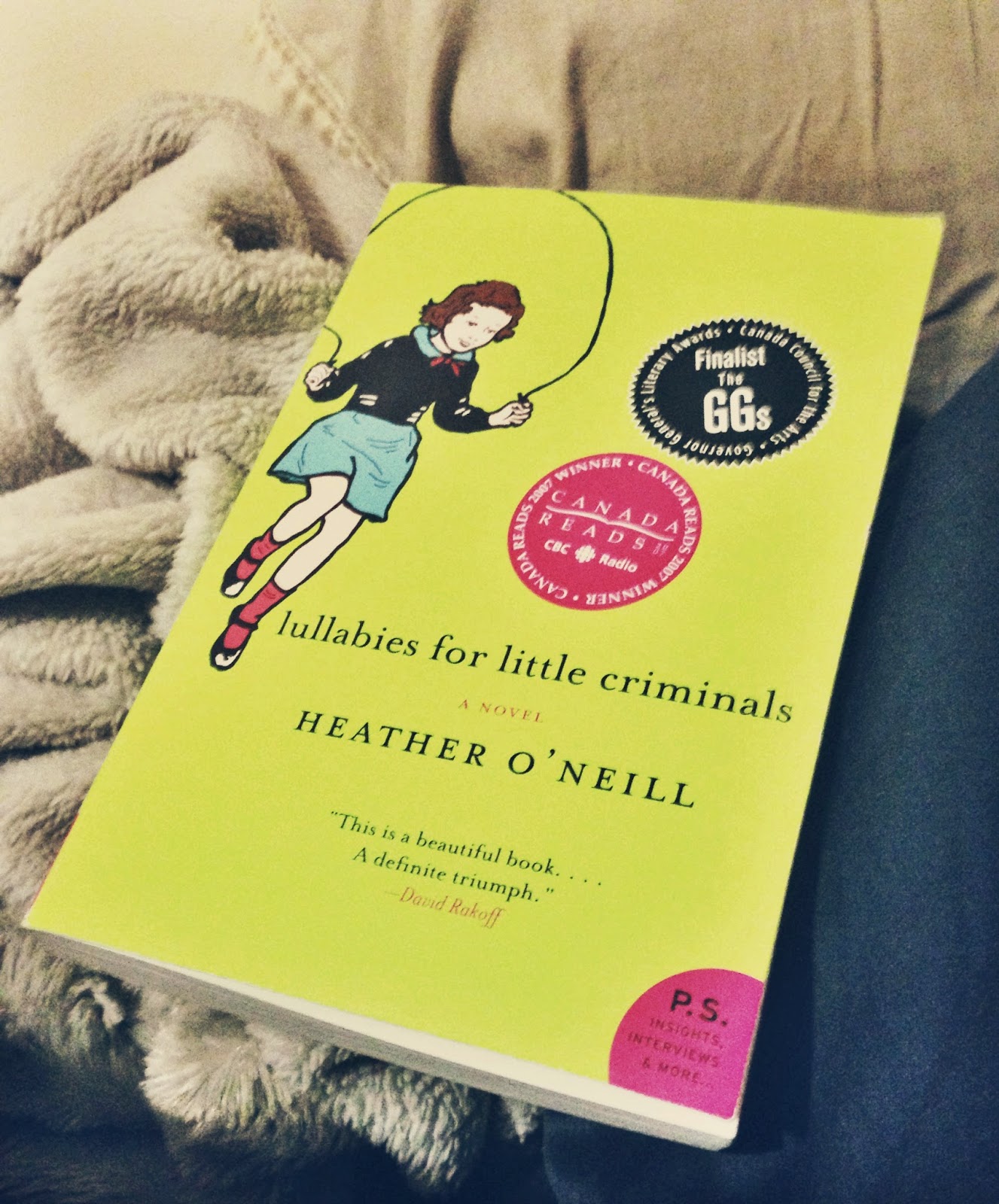 The first time I saw Dr. Phil interviewing a family with issues, I felt lucky. Unlike the strange and bold people who'd come on television to blurt their problems or the families I heard about through the grapevine of school officials, I ended up with the odds in my favour. I didn't get the coolest name (but let's be honest, it could have been a lot worse), but I did get two parents who sorta had/have everything more or less together and loved/love me to bits.

In 2006, Baby, the main character and voice of Lullabies for Little Criminals, and I are the same age. Montreal is doing a clean up that isn't televised, unless in celebration of the shakedown of mobsters, arrests of mafia members, and drug running busts. While I knew my area of DG (NDG) well enough, how to get around Uptown (the West Indian and Filipino sections of Cote-Des-Neiges at least), the beginning of Burgz (Little Burgundy), and Downtown (which really only was reference to a small strip on Saint-Catherine); I had no idea what Saint-Laurent, Saint-Henri, or Verdun were. In my world, drug dealers smiled and moved out of your way when you went to return your father's beer bottles, pimps cut the top of your freezes when you couldn't bite them open, and drug addicts kept their tools for the most part out of sight. I didn't know anyone my age, twelve, getting turned out. That's just the hand I was dealt. A lucky one.

Baby gets dealt the worst. Her mother is dead, her father is young and addicted to heroin. She has no steady home and her school treats her like a "system kid" instead of as a child in need (before she even gets into the system, mind you). Approaching a subject like this, a young girl being pushed into the system and facing abuses from every avenue, is not an easy thing. Baby, although in possession of a mature voice and beautiful similes, is just that — a baby. I'm not sure when the laws were set in place or all the fine details about it, but Quebec does have laws to protect children under the age of fourteen, especially in hospitals and educational institutions. Throughout the entire novel, knowing that Baby is only twelve to thirteen and isn't protected boggles my mind. No one is saving Baby from her father's emotional and physical abuse, the physical abuse from other children in the neighbourhood (even when it lands her in the hospital with serious damage!), nor the sexual, emotional, and physical abuse by the neighbourhood predator.

While many feel Baby's voice unable to be completely authentic (read: people who know nothing about children, especially city kids growing up faster than they should be), as they have mentioned her voice to be too mature for her age (which is foolish considering her situation is not for her age either), her story is unfortunately realistic. Before my fourteenth birthday, the police came to do a presentation at my school about pimping; the girl who was lured into prostitution was just like Baby. At fourteen I was in eighth grade, which is high school because practically no one in Montreal goes to middle school (I don't even think there is one). In eighth grade, the entire grade is being filed into the auditorium to have the police unit against child trafficking in Montreal speak to us about prostitution. At Baby's age, between 12 and 13, she'd potentially be either already in high school (which starts in grade seven), or just finishing up elementary school (in grade six). In Baby's case, this presentation given in eighth grade, my second year of high school, is too late. This is Montreal, and it has been Montreal for a while. With the city's extensive red light district, where I can clearly see an obvious strip club across from the bookstore I work at, comes horrible people who also want to exploit it. Lullabies is an honest look at some of the young people who are supposed to bring about a better Montreal in the future, but first have to deal with trying not to be swallowed up by the city.


I didn't think about it too deeply while reading Lullabies, but while making my way through the city, I realized how important this novel is for big cities. When the well off are placed high up on the mountain and the poorer are struggling at the bottom, when there are few "villages" to raise children, and finally when these children fall between the cracks, Lullabies is inevitable. O'Neill's debut novel is a powerful warning subtly wrapped up in some of the prettiest prose I have ever read. Her use of similes not only add an extra layer of imagery to her stories, but also play on the "like" epidemic most young people (and unfortunately many adults) have when describing something or telling a story. At first I thought O'Neill was packing in details, but while reading at one point on the bus I overheard a few girls from high school chatting and spitting out "like" every two seconds and found the same way of speaking reflected. Also, Baby is a "little adult", a term I hate to use, but is the only one that encompasses her speech that mirrors that of other kids her age on the surface with the depth of maturity brought on by books outside of her age category. I cannot be certain that O'Neill's diction is a method of character development and not just fluffy imagery, but I haven't seen anyone mention that theory that definitely could have some merit to it.


O'Neill bottles the experience of sitting on one of those winding staircases in Verdun, surrounded by the stench of cigarettes, and talking over the mix of screeching Hondas that should be retired to the scrapyard and screaming little children, with someone who has a story you would have never expected. I finished Lullabies on the métro (subway) in the middle of rush hour, and all I could think about was how many Baby's were stuck on this packed train car with me without anyone knowing it. Is O'Neill's debut a depressing novel? Yes. Does it have a happy ending? Yes. Does every one's depressing story have a happy ending? No. O'Neill shows Baby at her unluckiest and then shows us the glimmer of hope that Baby holds onto through the worst. Lullabies is definitely not your little fun read that you pop in before your little vacation to your all inclusive resort, but if you're looking for realness, a few tears, and a number of laughs, pick this one up. I can't wait for her next one to come out in a few months.