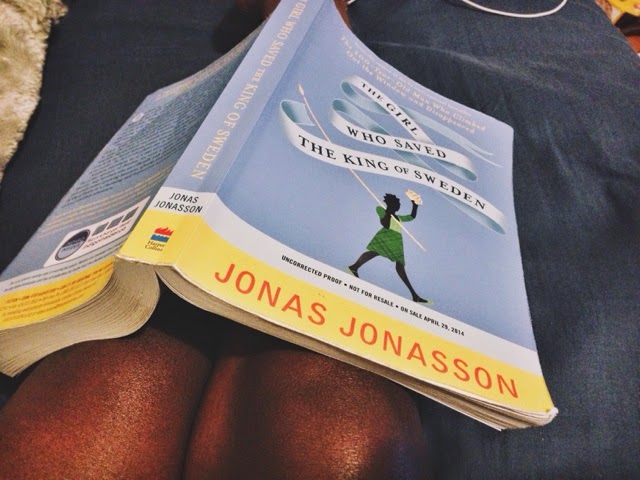 I don't really know if my opinion on book sales count for anything, considering I've only worked in a bookstore for a year, but I've definitely never seen anyone's debut work, fly off the shelves like that. Jonas Jonasson (née Per Ola Jonasson), who's debut novel The Hundred-Year Old Man Who Climbed Out the Window and Disappeared literally flew off the shelves about as fast as we could get them back on (especially around Christmas time when it was very popular and easy to sell to twenty-somethings looking to get their ageing family members a cheeky gift), is quickly following up with his second novel The Girl Who Saved the King of Sweden which is set to be released April 29th (USA).

If you liked Hundred-Year Old Man, I'm sure you'll like this one as well. The same cheeky writing and lots of twists and turns. The Girl Who Saved the King of Sweden is a multi-generational story that brings South Africa and Sweden, a mere approximate of ten thousand kilometers or six thousand miles of difference, too close for comfort for various governments. With chapters clearly jumping from character to character and each part bridging the gap between them closer together, The Girl Who Saved the King of Sweden has definitely been a fun read. Who else but Jonasson would bring together a self-starting and quick thinking girl from the slum-city Soweto, an American Vietnam War deserter, three Chinese girls with odd talents and extreme clumsiness, "an angry young woman", a pair of twins that the government recognizes as one person, and the two highest officials in the Swedish government. In terms of fun and a vibrant read, Jonasson excels. You also don't have to know everything about the history of the world, but it's definitely a better read if you've brushed up on your history of the world with it's race to make atomic bombs, apartheid in South Africa, and Sweden's interesting policies. There's been moments where I've Googled events spoken of in the book, and despite how far fetched they sound, they've actually occurred. I'm no history buff, and I wouldn't exactly call this historical fiction, but Jonasson's way of playing with the past is a a neat way of nodding to his previous journalism work I'm sure.

While I feel that it's first publication in hardcover will be a drawback as it's not so easy to pop in your bag like Hundred-Year Old Man, a trade paperback was, I definitely think that fans will spot this immediately because of the cover's resemblance and those in the younger generations will lean closer to picking this one up as well.

Labels: jonas jonasson, the girl who saved the king of sweden, the hundred year old man who climbed out the window and disappeared