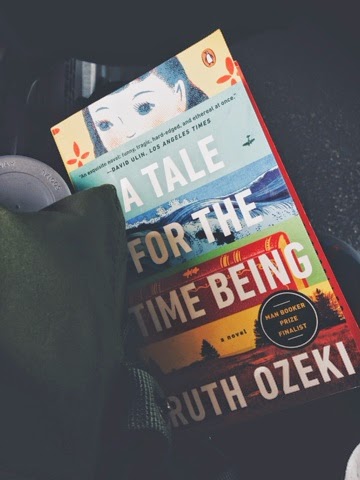 When Deanna hit me up with urgency to tell me about A Tale for the Time Being by Ruth Ozeki, I'd already seen it and shelved it a few times since it's paperback release. Now, I'm all for a good book suggestion or two (or more, considering how stuffed my library is now), but when Deanna said "nah you have to read this" I realized she was serious.

Despite my undying love for Japanese authors, they're kinda weird. Maybe it's the whole modern Japanese culture and all of it's extravagance, but it's quite odd. I'm probably going to get stuck with the "weeaboo" title after this, especially since my fixation on Japan has become intensified with my trip coming up. I really enjoyed A Tale for the Time Being, and I’m really glad Deanna recommended it to me. “Coming of age” novels are definitely geared more towards teenagers and young adults, but I feel like Ruth Ozeki did an amazing job of bringing the elements of self-discovery to all of her characters, despite their age and place in life.

We open to Nao’s voice, who’s the book’s main focus, even when all the way across the Pacific Ocean. Ozeki does a great job bridging time across the Pacific Ocean, recanting Nao’s daily life and eye-opening summer with her Buddhist nun grandmother almost seamlessly alongside Ruth’s stormy season on a small island off the coast of British Columbia with her husband and annoying cat. From World War II, to a few years after the “dot-com” bubble burst, to Japan’s most recent natural and highly devastating tsunami, Ozeki spins a beautiful tale of a young girl growing up in a strange country to discover her equally peculiar history. I also love the little touches she puts in the novel, the footnotes and appendices that remind me of Junot Díaz. Especially for a novel like this one, I’m sure a lot of research was done, and it’s nice to see some of that in it’s raw and less spiced-up and imaginative state. Ozeki also makes many Japanese references, including to traditional poetry, which is difficult to translate into English. With each character broken down in the footnotes and their individual representations, the poetry definitely has much more depth behind it.

A beautiful look at family, relationships, and interestingly enough the human reaction to guilt and war (as seen with Nao’s father and uncle), A Tale for the Time Being is definitely a good summer read to pick up for those outdoor lunches you push the time limit on. It might be thick, but it’s a guaranteed page turner with Nao’s quirky voice.

Labels: 50 books in 52 weeks, a tale for the time being, ruth ozeki, women writers reading group