I'VE BEEN READING FUTURELAND AND PLAYING TO PIMP A BUTTERFLY WHILE I'VE BEEN ABSENT.
leave a comment (1)
If you went by most futuristic movies and novels, you would think only white people have existed and will be the only ones to ever survive. No matter how much Star Trek and Stargate my parents put me on to nor the countless small paperback novels I snuck out of an older friend of the family's room to devour, it was very rare that anyone of colour in those mediums had a presence that wasn't villainous nor disposable. Only recently did I discover Octavia E. Butler and Nnedi Okorafor, women I wouldn't have known existed if it wasn't for random internet connections. I was lucky to find Jamaican-Canadian author Nalo Hopkinson in passing on Twitter, who’s work ultimately led me to finding Walter Mosley and his collection of short stories entitled Futureland. I barely got through the best rated review before I was already scrolling up to click away for an instant buy. I still have that huge box of sci-fi mass-market paperbacks, so I didn’t want to get anything too heavy nor time consuming. It arrived sealed between two metallic silver coloured plastic sheets with all the air sucked out of it, as if it couldn’t arrive anymore like a care package in a post-apocalyptic world. By absolutely no means did it take me seventeen days to read this as it says on Goodreads; I would have read it all in one day if I hadn’t restrained myself. 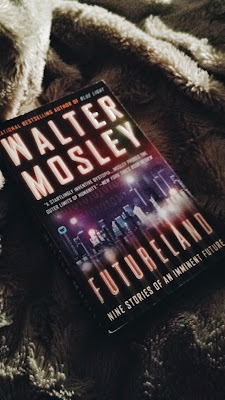 While the nine short stories are listed as a compilation, Walter Mosley has all of them interwoven through time and space to create Futureland. In this new world, every divide you think the government could exploit, has been. And by government I mean corporations that have monopolized everything from the media to your right to work. Futureland is a beautiful collection of the struggles black people still go through in the future, just to see the next day. From the lowers on Common Ground to the geniuses of the race, Mosley leaves no one out. A young uncle cycling continuously into trouble makes drastic changes in order to provide for his orphaned nephew. A woman of mixed race and engineering fights her way to the top without hesitating to punch her way out of society’s still looming patriarchal views. A man ready to end his life is called on as one of the chosen. A tennis game becomes much more than what meets the eye. For all the lovers of science-fiction novels wishing for characters that in a post-apocalyptic cyberpunk world look like us, Walter Mosley’s Futureland will warm your heart.

In the inspiration of other afrofuturists such as Janelle Monae and George Clinton, I decided to give Kendrick Lamar’s To Pimp a Butterfly a first listen just yesterday. Opening with a very soulful “every nigga is a star” crooning over an amazing introductory track, Kendrick’s third album is an eclectic blend of jazz, spoken word, funk, and classical 808s. It’s obvious that even with the megaforces that trap music and rapping like you have water in your mouth are at the moment, Kendrick really did have a vision for this album and stuck with it. The cyberpunk vibe to Bilal and Anna Wise’s voice during the tech portion of Institutionalized is the latest siren song of afrofuturists everywhere. If in a thousand years from now Earth hasn’t been completely destroyed, I can definitely see people dancing to These Walls in technosuits on a crazy coloured glass dancefloor in the sky; a really great mix of funk, rap, and synth. Originally, my favourite song on the album was King Kunta, but as soon as the beat dropped on Alright, I instantly changed my mind. 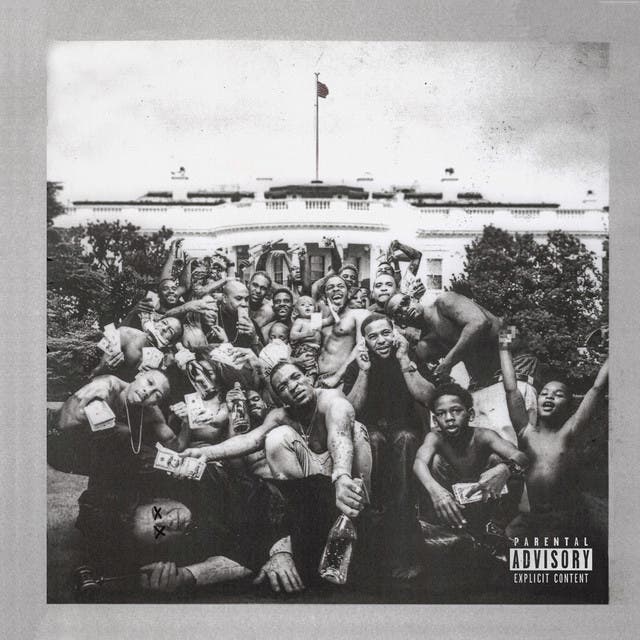 When I was a kid I found out about Star Trak by accident while doing a search on Star Trek. Pharrell’s production has always been futuristic and one of my personal favourites. However, I have recently stepped away from Pharrell after finding about his New Black attitudes, hypocritical considering he was rapping with Kelis just a minute ago about problems black youth living below the poverty line in hoods feel onGhetto Children from Kelis’ 1999 debut album Kaleidoscope. But this duo doesn’t surprise me. When I started listening to The Blacker the Berry, I absolutely loved it, especially when Assassin’s voice came blasting through. It sounded like everything I loved listening to from the West Coast growing up, and unfortunately included the same foolishness I was force fed as a child. Kendrick and his muddled respectability politics are not ones only I’ve realized. Right at the close of King Kunta, Kendrick Lamar speaks the first line of the short poem evolving through the album “I remember you was conflicted, misusing your influence”, a line that really makes me wonder. This entire song is a misuse of Kendrick Lamar’s influence! Promoting respectability politics helps no one; they hold one people to a high standard to another’s mediocracy. I understand being conflicted about what you should do or how do you proceed in terms of "am I going to just survive, or am I going to fight back?”, but now you have to acknowledge that you’re problematic as you project your backwards respectability politics and inevitably becoming an overused soundbite in the making by equally backwards (if not more) reporters and journalists. To be honest, when I first started seeing articles about Lamar’s respectability politics, it was the first thing to put me off from listening to it when it was “accidentally” released (also known as “leaked” to those of us with half of a brain) by his label on March 16th, a week before it was supposed to be released March 23rd. With all the problems Kendrick stuffed into that five minutes and forty-nine seconds (I’m still looking to replace the track with an instrumental version though), I guess I can manage to ignore it long enough to enjoy Hood Politics, Complexion, and Mortal Man.

I’d be lying if I said Kendrick Lamar’s third album was a flop. Absolutely nothing like his previous two albums soundwise, he blends soul, funk, jazz, and spoken word genres into a futuristic blend of hip-hop and soul with the help of Thundercat, Pete Rock, Snoop Dogg, Pharrell, Bilal, and George Clinton. To Pimp a Butterfly is beautiful, from it’s speedy intergalactic/soul throwback intro to Kendrick’s cliff hanger conversation with Tupac. With amazing interludes that have now prompted me to add “ain’t freeeeee” drawling behind something exasperating, highly imaginative wordplay, and a uniting poem, Kendrick Lamar’s To Pimp a Butterfly is a timely and important album.