« FOR COLOURED GIRLS WHO HAVE CONSIDERED SUICIDE WHEN THE RAINBOW IS ENUFF »
PRESENTED BY BSN MCGILL / DIR. GURAMATUNHU, A REVIEW.
leave a comment (0) 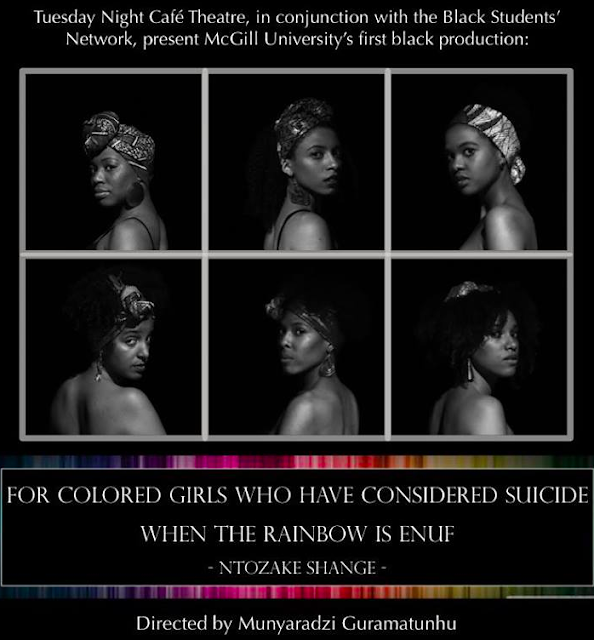 I remembered the first time I found Ntozake Shange’s choreopoem in my elementary school library when I was watching it’s performance, directed by the talented visionary Munya Guramatunhu. I often wondered where these books in the library came from and who really thought that these books were appropriate for children, but I dared not question for fear of losing access to a goldmine of forbidden fruit. I remember reading “a nite with beau willie brown”, told by the Lady in Red, the heat of a previous summer in Harlem creeping up and choking me.

Ntozake Shange’s For Colored Girls Who Have Considered Suicide When the Rainbow is Enuff first opened my eyes to some of the cycles that women went through in the 70s; Black women facing the disasters of loving in this time, especially towards the climax of the piece, where we see the outcomes of “the last time” not really being the last time. Countless Black women found themselves in the middle of the first waves of the HIV/AIDS virus during a time of free love and unsanitary habits. Ladies in Red, Yellow, Purple, and Brown tell a haunting tale with “positive” and Lady in Red always pulls my breath from my toes all the way out at the height of the choreopoem, before they all join in a laying of handles to collectively heal. “Abortion cycles #1” is a vicious section that bears a title that makes me wonder if there’s a significance to a number on the cycle count, as this part definitely does not read to repeat. I dream of a soulful Mary J. Blige rendition of “somebody almost walked off wid alla my stuff”.

Back from Barbados and barely adjusting to the cold, if it wasn’t for Shanice Nicole I would have missed a true mastering of this piece. I’m more than familiar with the choreopoem (with an apprehensive interest in the lives of Black women in America’s “Great” cities during the 70s due to the creeping darkness that still tries to bury) and have been fortunate to see the choreopoem more than once performed by a few top groups worldwide. As appreciative as I am and individually captivated by each performance, none of them have blown me away like McGill’s BSN (Black Students’ Network) co-presentation of not only McGill’s first all-Black and all-female production, but also of the first production of For Colored Girls ever done at McGill under the direction of Munyaradzi Guramatunhu.

From jump, the six women with natural hair of different textures and styles; long skirts with coloured panels with matching fabric chokers to identify them; and a mix of shapes and sizes, are completely captivating. From an intimate stage under a curious spotlight, they command attention with an intensity that reminds you what it feels like to be alive. Guramatunhu credits her gut feeling for choosing Keren Roberts (Lady in Blue), Nelly Zarfi (Lady in Brown), Inès Vieux Francœur (Lady in Green and Orange), Jamilah Joseph (Lady in Purple), Lorna Kidjo (Lady in Yellow), and Betina Bailey (Lady in Red) as her cast, and it is a decision the audience does not regret. Each of these women posses a mastered control of their bodies as vessels for a performance with an intensity you wouldn’t expect to still be burning so strongly in the second to last night of such a charged piece.

With but six black boxes, a sheet gripped between two poles, and a spotlight, Guramatunhu pulls us into her minimalistic vision of the choreopoem that places all of our attention on the talented Black women on stage. Breaking up the piece small playful segments of dance and hand games, and easing the tension through having the actress pace back and forth doing various breathing exercises on stage were interesting methods of pause for digestion. Placed perfectly within and following pieces, these little breaks allow the audience to catch their breath before getting back on the roller coaster.

Having the entire cast on stage for “graduation nite” and “latent rapists’” proved an interesting touch, as well the use of the group to tell different versions of the same experience through repetition during the first piece and shifting the voices to then form a collective call out of the same latent rapists spoken of in “graduation nite”. I’ve never seen a performance of “sechita” like Joseph’s, from behind a white sheet and a spotlight, dancing coyly with a veil of dignity under Guramatunhu’s creative direction. A freeing piece, Guramatunhu’s sheet gives a nod and respect to the Black women, specifically dancers, working not only under the white male gaze, but the scrutinizing gaze of Black men post-Civil War. Under Guramatunhu’s direction, this production of For Colored Girls is a true nod to the Black women before, beside, and after us; the cast’s ability to transform themselves, allowing the trials and triumphs of Black women through time to take them on as to deliver Shange’s choreopoem in this way is absolutely breathtaking.

Roberts’ ability to bring us right to the dingy abortion table, conveying pain I am not strong enough to bear. She gives us an unmatchable performance intensified by moans and groans, climaxing into a sobbing fetal position of “abortion cycle #1” that is absolutely incomparable. Zafari’s ability to take on the role of a bright and feisty young girl is almost too perfect, and her ability to transform into a booming voice gives a stark contrast in “positive” just as convincingly only magnifies her talent. Vieux Francœur claims this as her “first foray into theatre”, but her performance on stage leaves me questioning this. As she holds onto “somebody almost walked off wid alla my stuff” with a slick sarcasm and a range of sass from head to toe that doesn’t miss a beat; the piece is alive when she is performing and you have no choice but to bear witness and cheer along. When Kidjo performs “positive”, you feel it. You feel the anger. You feel the sting of betrayal before the fist finally connects. In what should be a love rekindled, Kidjo does not hold back the crushing weight of the HIV/AIDS wave on the lives of unsuspecting Black women and you can see that generational pain pouring off of her during her performance.

Finally, before the much needed “layin on of hands”, Bailey takes the stage to perform my favourite piece, “a nite with beau willie brown”. As it is my favourite, I’m usually quite picky about its performance; I fell asleep during one New York production. It is absolutely impossible to fall asleep during Bailey’s performance as Lady in Red in “a nite with beau willie brown”. From beginning to end, Bailey had me trapped alongside Crystal in the nightmare of her relationship. Holding onto the edge of my seat, unblinking with my stomach in my throat until the end, when her final cries made it feel like I was being launched out the window alongside Naomi and Kwame, I’ve never been blessed with such a performance. Words do not measure up to accurately convey how powerful of a performance Bailey delivers; I was told her prior performances were even more riveting, a sign of strength I cannot fathom and can only respect in complete awe.

In a year where women are standing up, Guramatunhu’s direction and chosen cast pay homage to Ntozake Shange and her ability to turn pain into art beautifully. I cannot thank them enough.